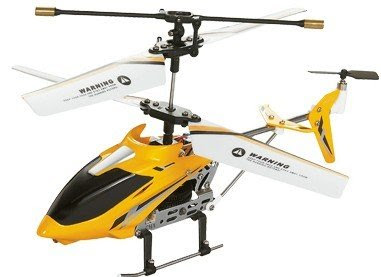 The Ministry of Communication and IT had instructed the airport Customs department in 2010 to seize high frequency radio-controlled toy helicopters owing to security reasons. Customs authorities, however, were not given guidelines on the disposal of the same and are now facing a space crunch in their warehouses.

Restrictions have been imposed on the import of aero models that run on high radio bandwidths because of their possible interference with the communication networks of security agencies.

Intelligence agencies suggested a ban on such toys and the Ministry of Communication and IT issued a notification on September 16, 2010 (a copy of which is with SMD) and the Customs department was asked to confiscate all such imports. The ministry issued another letter on October 5, 2010 in which it cleared which frequencies were to be permitted.
at February 06, 2008

Is it still banned? or what frequencies are allowed? i bought a syma s107G for my nephew..iam confused..plz help

I am taking a similar toy helicopter for my nephew too. Can someone tell me, is it permitted to take with me.. How about I remove all the batteries and obviously nothing is functional without them..

Typical knee-jerk reaction from the oh-so-predictable Govt. of India, run by moron babus. High frequency, what?!! Instead of putting everything and all in a limbo, why not give some guidelines like "must be approved by FCC/CE/UL/ISI etc."? Remember, India's a "democratic" country whereas most of these toys're manufactured in a not so democratic country nearby and run by a paranoid govt. but even they haven't banned these toys!! Everything about the Govt. of India needs to be overhauled, starting with the rules & regulations to the very 'babus'!! Mera Bharat Mahan!!!

is it still banned rc helicopter in mumbai airport.

Still banned rc helicopter. .i want to carry for my son.. Pls help